I wore the uniform of a criminal

On a cold night in February, 16-year-old *Trevor found himself with his face and stomach pressed against the side of a police care. His hands were being cuffed behind his back and as he looked to his left his younger brother starred at him with tears streaming down his face. A police officer was tightening his wrists in cuffs as well. “Stay calm,” Trevor told his brother. “Do everything they ask. I’m going to fix this.” 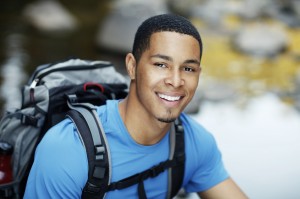 Forty-five minutes earlier Trevor and his brother had entered their kitchen for something to drink. Their mother was standing at the kitchen sink with her back to them. In an instant, she turned with a knife and pointed it at them. “She was screaming at us, and I had no idea why. It wasn’t anything new really, but it still scared me every time,” Trevor said. “I worry about my brother. We don’t have a father figure, so I have to be a good man for him. I have to protect him.” Trevor, older and larger, positioned himself between the knife and his brother. His mother lunged at him, cutting him on the arm. Using a maneuver he learned as a member of the wrestling team at Dreher High School, Trevor wrapped his arm around his mother to try and take the knife from her. She bit him, and drew blood. He let her go at the same time their neighbors entered the kitchen. The neighbors were known drug dealers, and Trevor feared them. Trevor’s mother began to scream, “They’re trying to kill me.”

By the time the police arrived, the mother and neighbors were repeating those words. The police took both boys into custody immediately. Trevor can tell you the exact moment – date and time. “I was in Cell A3 for 72 hours. It felt like 72 days,” he continued. “I wore the uniform of a criminal. I road in the back of a patty wagon with my wrists and ankles shackled to my brother.”

Trevor’s brother was in a cell on a different block and they weren’t able to speak to each other until their court date. Trevor worried about how his little brother was holding up or if others would try to hurt him. They were each assigned a defense lawyer to represent them in court. Trevor doesn’t fully understand what happened in the court room, but he remembers his mother’s outbursts and the judge making her be quiet. He also remembers seeing his wrestling coach, Mr. Brooks, and school social worker in the back corner. They had been there for a different case and stayed when they heard Trevor’s name called.

“I saw my coach after that in the hall,” Trevor said. “He is a good man. He is good to me. What he said helped me through that. He told me the team missed me; they didn’t know what happened to me or why I didn’t come back to school. He told me they needed me; that the other team members looked up to me.” Trevor thought for a moment, “Wrestling saved my life that day. My mother was coming after us and she wanted to hurt us. My wrestling moves helped me stay calm and restrain her until my neighbor came in and knocked me down. He was a big man.”

After the court hearing, Trevor and his brother were placed in a foster home zoned for a different school. The lady was nice, but Trevor really wanted to return to Dreher, so he began advocating for himself and his brother. He had been in foster care before and had been returned to his mother. “I have an imprint of a belt buckle on my back and scars on my hand from where the jewels on the belt pierced my skin,” he said. “I wanted to be some place that was close to Dreher. I wanted life to be stable for me and my brother.” Trevor remembered seeing other teens walking to Dreher from Epworth. He knew some of them, and started researching online. He wanted to admit himself and his brother, but learned he had to work through his lawyer and case worker to help make that happen. Finally, it did.

“When they arrived, they were all smiles,” said Deborah Keller, Intake Coordinator for Epworth. She began asking the normal questions she asks during an admission, and Trevor told her the whole story. She asked him why he worked so hard to make sure he and his brother were at Dreher. “I had to. The system is broken,” he said looking at his case worker.

It has been five months since that day. He finished out his junior year at Dreher with a 3.3 GPA, up from his previous 1.75. He was able to finish on the wrestling team, and plans to do track and football during his upcoming senior year as well. He has a job this summer working Monday – Friday mornings. He appreciates the calm worship presence where he can reflect on his life. “I still haven’t forgiven my mother,” he said. “I don’t know if I ever can, but I hope to.” Trevor has been on beach trips where Rev. John Holler, President of Epworth, helped teach him to swim and day trips with cottage partners. But his most recent trip, is his favorite.

Each summer the older boys at Epworth are given an opportunity to hike 50+ miles of the Appalachian Trail. Trevor decided to go on the hiking trip, “for the food.” It seems the food they cook out in the open along the trail left an impression with the boys who went the years before, and Trevor was looking forward to the trip with his friends. Trevor is confident and as an athlete didn’t feel like the physical challenge of the trip would be too much for him. What he wasn’t prepared for was the spiritual challenge.

Before the group left their first shelter to begin their journey they sang camp songs together and shared fellowship. They were told that during the trip they needed to think about their “Little Foxes” and “Holy Grails.” A Little Fox is something that might cause them to struggle and perhaps not finish. A Holy Grail is something they can focus on to help them succeed and finish the trip. There were lots of funny stories about good-ol’ boy behavior during the trip, but more about what they learned.

“On the first day, I found myself ahead of the group,” said Trevor. “I found myself at a fork in the road and didn’t know how to read the trail markers yet. I was asking myself, what do I do now. I remembered feeling alone back in my own home. Then I heard a voice coming up from behind me. I couldn’t see him yet, but Mr. Carter yelled, ‘Wait for me. I’ll show you the way.’ I’ll never forget that moment. It was like a God thing. After he caught up to me we walked together the rest of the day talking about all sorts of things, but especially about how hard it is to forgive.” 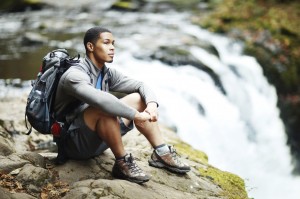 Trevor continued, “Then later in the week, one of the staff got awful blisters. He wanted to quit. I wouldn’t have blamed him if he did. He was really hurting. We all stopped and decided it was really slowing us down. Together we decided to carry his burden – like a little fox. We all divided his pack and carried our share of it. It was getting really heavy. His little fox became my little fox. I was walking down a path covered by trees and you couldn’t see the sky. Going downhill, you can’t look up because you will trip on a stump. Coming up hill though is different. I remember toward the end of the last day, I was coming up a long hill that was killing me. The weight of my pack and carrying his burden was getting to be too much. I looked up and the light was shining through the trees. I spread out my arms and said out loud the words of a song we learned the first day, ‘I’ll hold out my hands. Let me be open to you.’ It was another one of those God moments.

Trevor also shared his Holy Grails. “Well, I actually had three. One – they promised us warm, fresh cinnamon buns when we finished – I couldn’t wait for those! Second, seeing the light shine through the trees on the way up that last hill was like the light at the end of the tunnel.” He pointed to his chest and continued, “This is number three.” He was wearing a t-shirt with five figures walking in a line. They were each connected by their hands. He continued, “This t-shirt. This trip really was about us being connected and growing stronger together. I have never had that, and when you haven’t had it – when you haven’t had a strong man in your life – you latch on to it when it finally comes.”

My Deepest Fear in Life

Trevor paused for a moment and gathered his thoughts. “My deepest fear in life is being a failure – not being a provider or protector,” he said sincerely.

Trevor wants to be a police officer. He is beginning his senior year at Dreher and is in the process of deciding whether or not he wants to go straight to the Police Academy or if he wants to get a Criminal Justice degree first. He knows that Epworth will walk with him regardless of his choice. “The police have been an important part of my life. I don’t blame them for arresting me. They were doing their job. That’s why I stayed calm. I would hear them when they pulled up to my house again and again, ‘watch out for the woman in here.’ They knew how my mama could behave.” He stopped and gathered his emotions, “I want to make sure other children don’t have to grow up like I did. I want to be a protector. I want to provide for my family. My deepest fear is that I will fail at that.”

Ask Trevor and he will tell you that advocating for himself and his brother to be at Epworth is the best thing he has ever done. “Some of the kids here complain that there are too many rules,” he said. “They just want to think they can do whatever they want, but I tell them that Epworth has rules because they care about us. The people in our lives before just let us do whatever we wanted because they didn’t care.” He continued, “I just tell them that Epworth is perfect for us. It’s comfortable, stable and safe. Those are things that really matter to us right now. I never had people in my life I could count on. I can count on the people here.”

Follow-Up:
Summer 2014 The Record
From Jail to College