The Beautiful Rewards of Foster Parenting 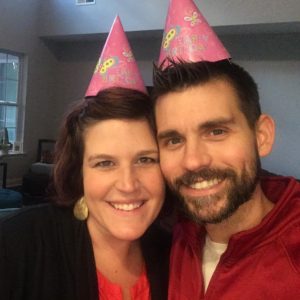 If Shannon and Justin Carter could tell you one thing about being foster parent, it is that it is hard – but it is so worth it. And that they would do it again in a heartbeat.  Some of the best rewards in life come out of the hardest times, and being a foster parent is a perfect example of that.

Shannon and Justin decided before they were married that in addition to having children of their own, they wanted to adopt. They talked about it again after they were married, and even after the births of their three children (ages 8, 6 and 2). Thinking it was a foregone conclusion that adoption was the road they would go down, they never anticipated that hearing a speaker at a baptism for their friend’s son would change the course of their lives forever.

The gist of the speech the woman gave was that yes, fostering a child is hard. It is a lot of work, and will challenge you constantly. But it is not about you. Those words had a profound impact on the couple, and stirred an awakening in Shannon and Justin’s hearts. Justin came home from the baptism and told Shannon, “I don’t think we should adopt. I think we should foster.” And after six months of praying and soul searching, Shannon agreed.

In South Carolina, there are approximately 4,000 children in foster care and only 1,400 homes to meet this need. With such a huge shortage, Shannon and Justin knew that even though there would be a wait as they went through the process, a child would be placed with them eventually. Their first step was to reach out to Epworth, since they had volunteered at Epworth before and liked what they already knew about Epworth. The Carters also heard about the Foster Care Program at Epworth Children’s Home, which had been started to assist and identify families who would like to become foster parents. They called Erinne Rodgers, the Foster Care Director at Epworth, and with that they started down the road to becoming foster parents.

Then, four months ago, came the phone call that they knew would come. “I have a 3 year old girl and her 1 year old little brother that both need a home. We really don’t know much about them yet. Are you ready?” Erinne asked Shannon and Justin. They were ready, but they were also nervous. Preparing for a foster child is not like the nesting process while awaiting the arrival of a newborn during pregnancy. You cannot shop for clothes or diapers since you do not know the child’s sizes, preferences, or really much about them beforehand. Shannon and Justin had a room set up with a crib and bunk beds, and plenty of toys and children’s gear from their three kids, so they were as prepared as they could be.

The first day the 3 year old girl and 1 year old boy siblings came to their home, Shannon and Justin’s children started playing with them immediately. The Carter kids had been eagerly anticipating the day when their new residents would arrive, and were thrilled they were finally here. While the initial interaction amongst all of the children was great, the first week was rough, especially for the 3 year old girl. She was having a hard time adjusting, and would act out and push limits. Feeling overwhelmed, Shannon would dread when Justin would leave for work because it was so hard to be solo with all five children.

The Carter’s six year old daughter was also having a difficult time adjusting to the dynamic of having another girl in the house around her age, with whom she now had to share the attention. The fostered one year old boy was not used to positive loving touch, and would be stiff as a board if you tried to hug him, comfort him or even put lotion on after a bath. There were so many moments when Shannon thought to herself, “Did I make a mistake?”

About the initial adjustment period, Shannon said, “it was one of the hardest things we have done, and it put us on our knees. We fully had to rely on God every single day just to get through. But we have seen incredible changes in the kids – and ourselves. We have grown together as a family in ways I could have never imagined, and we have all grown closer as a family. It’s hard. But I would totally do it again because through this experience we have seen God work in amazing ways.”

Four months later, their daily life has reached a new normal, and it is hard for Shannon and Justin to remember a time before the siblings lived with them. The past four months have flown by, while feeling like forever at the same time. All of the children act like siblings and do not differentiate between biological and foster child. And the two foster siblings have grown in leaps and bounds. “It’s like they have been given permission to be children again. It is a beautiful reward.”

The one year old boy giggles and laughs when you play with him now, and will come climb on Shannon and Justin’s lap to be closer to them. Their six year old daughter has taken on the role of older sister to the now almost four year old girl, and they have a great relationship. In watching how the Carters interacted with her little brother, the almost four year old has become more caring and even somewhat maternal to her one year old brother. These were traits she never displayed before, and they were learned after being modeled for her by the Carters.

There is no way to know how long the siblings will be with them, and sometimes it is hard to make plans. But Shannon and Justin just take each day as it comes. They have a great support system in their church, Epworth’s Foster Care Program, and their friends who have also fostered children. Shannon says she does not know what she would do without her village. Just to be able to call and talk to people who have been through the same process has been amazing.

If you are considering being a foster parent, please come to one of our monthly information sessions or contact Erinne Rodgers at erodgers@epworthsc.org.  Even if being a foster parent might not work for your current circumstance, foster parents need all the support they can get, and there are always ways to get involved and help. And if there is one thing that can be learned from the incredible story that Shannon and Justin have shared, it is that you are not likely to regret it.