The scene was a familiar one at the Epworth Christmas pageant this year. It was a cool Sunday night in early December.   The 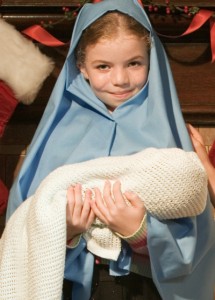 pews were full and little children dressed as angels were standing near the altar.  As the tune of Oh Little Town of Bethlehem rang through the church, down walked a cute 7-year-old girl named Elizabeth,* who was proudly playing her role in the Christmas pageant.

Before she came to Epworth, Elizabeth’s mother struggled to provide for her.  As the little girl became school age, someone in the community noticed that something in the family was awry.  When the South Carolina Department of Social Services intervened, they discovered years of neglect, abuse and abandonment.  Elizabeth was removed from the dangerous situation.  The courts later terminated parental rights and Elizabeth was placed in Epworth’s care.

After her placement at Epworth, Elizabeth’s the pain from her traumatic past materialized through continued episodes of unpredictable behavior.   She was defiant.  She frequently threw tantrums that disrupted the cottage environment.  This was especially true at bath time, where almost every night the staff struggled to convince her to take her bath.  Bath time was a trigger for her trauma.  Elizabeth screamed, hid under her bed, ran from the staff and yelled profanity at them.

On most mornings, the routine was similar to that of the night before.  She refused to get out of bed.  Then she refused to get on the bus to go to school.  Once at school, she cycled between being a great student to struggling to manage her behavior.  She is very bright, and her teacher tried to keep her on task, but all too often Elizabeth found herself in trouble for disrupting her class and defying her teacher.

It was evident to everyone at Epworth that Elizabeth was hurting deeply.  In addition to surrounding her with care in the cottage, Epworth also matched her with a licensed counselor to begin the healing process.  After a few sessions, the counselor recognized that Elizabeth was following a common behavior pattern for those who have experienced chaotic environments at a young age.  Elizabeth was using defiant behavior to try to control every situation in her life, and cover up her deep-seeded fears and anger.  With each emotional outburst she spiraled further into the destructive cycle.

As her comprehensive care plan kept the focus on her healing process, Elizabeth’s behavior began to improve.  The staff in her cottage provided positive reinforcement, and praised her when she made good decisions.  At school she became more respectful to her teacher and her behavior improved.   She began to thrive at things that she loved, especially music.  She began singing, and especially loved singing in the Epworth church choir.

Rev. Meg Cook, the Epworth pastor (“Pastor Meg”), and Elizabeth began sharing more time together as the year passed along.  During the times when Elizabeth struggled in the cottage, Pastor Meg often went with her on walks.  The walks usually involved a trip to the sanctuary where Pastor Meg “checked on the church.”  When the sanctuary door opened, Elizabeth often walked down the aisle to the front altar rail, kneeled and began to pray.  She did all of this on her own.  Sometimes Pastor Meg joined her, sometimes she prayed all on her own.  “It was obvious she had a big faith life,” said Pastor Meg, “She was just too young to articulate it.”

Elizabeth’s process of healing did not happen overnight, nor has the healing been fully achieved, but as the months have passed her episodes of defiant behavior have become less frequent.  At times she still cycles from periods of calmness to turmoil.  Her healing is a work in progress—an ongoing work that will be needed for years to come.

Still, on that cool December night during the Christmas Program at Epworth, Elizabeth was as calm as ever.  All eyes turned to her, as she walked down to the base of the altar.  It was a familiar stroll for her as she traveled the same path she did on those walks with Pastor Meg.  She walked with confidence to the altar rails where she proudly took her seat by the empty manger.  There she waited along with the rest of the crowd to witness the arrival of Jesus to save a broken world.

What’s Next for Elizabeth?

Recently Elizabeth began going on weekend visits with her aunt and uncle.  Her aunt says that no one has seen or heard from Elizabeth’s mother in months.  The weekend visits have gone well and Elizabeth enjoyed getting to know two relatives she did not really know before coming to Epworth.  She will continue to receive the care she needs at Epworth in order to break the destructive cycles in her life until a permanency decision (reunification, kinship care, adoption, etc.) is made by the Department of Social Services.