Getting on the Right Track 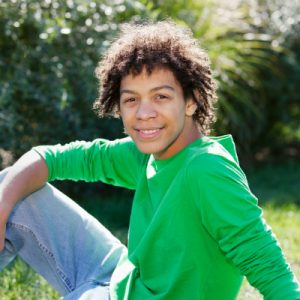 Derek* did not have a stable childhood.  He experienced emotional abuse and neglect at a very young age.   The most stability he had was when he was with his elderly grandmother.  Eventually she became his sole caretaker, but by then he was experiencing the after-effects of a childhood filled with trauma.  He had low self-esteem and was socially immature for his age.  He felt as if he did not really fit in anywhere.

Eventually those feelings overwhelmed Derek and he began to use drugs and alcohol.  He grew to despise authority figures and a defiant behavior pattern immerged.  Soon he began hanging out with the wrong crowd in his neighborhood.   His new “friends” seemed like the perfect fit for him, giving him purpose and sense of security.  However, things spiraled out of control.   Soon he found himself in trouble with the law and in the custody of the Department of Juvenile Justice (DJJ).

Derek entered a program with DJJ where he was given the tools to stop the downward spiral and find a way to start putting things on the right track.  He did everything that was asked of him and he completed the program with a new outlook on life.

Unfortunately at the same time, his grandmother’s health declined to a point where she could no longer take care of him.  Without another place to go upon discharge from DJJ, Derek was placed into the custody of the Department of Social Services.  His case worker reached out to Epworth to see if he would be a good fit.

After getting to know Derek and reading glowing recommendations from DJJ, the solicitor’s office, DSS and his counselors, he was admitted to live in a cottage at Epworth.   Derek viewed Epworth as a welcomed opportunity to continue to grow and redirect his life.  He quickly adapted to the cottage environment and bonded with the staff who worked with him.  He befriended the other boys and quickly became a positive influence in the cottage.

Derek enrolled in school.  His troubled past meant that his grades had not always been perfect but Epworth worked with the local school district to get him enrolled in a program where he could complete his high school studies and begin to establish work history at the same time.  Through the program he began working in the school dining operations.

A few days later, he decided to take a few extra steps.  He drafted a resume on the computer and printed it off and walked over to the Epworth dining hall one afternoon.  He explained that he was getting experienced in the food service industry and he wanted a job at the dining hall.  There was not an immediate opening in the dining hall but Epworth agreed to help him in his pursuit, including connecting him with other job resources, once he became more established in his school and study habits.

A few days after that, a volunteer group came to Epworth to talk with the teenage boys.  The group is a social club that consists of men from all walks of life, from doctors to teachers.  On this day, however, the program leader was a member who was a deputy in the Richland County Sherriff’s Department.

For Derek, like many of the boys in the cottages, his interaction with law enforcement had not always been a positive experience and he struggled to relate to police officers.  However, on this day, he found common ground because the officer speaking to them had one day been in his shoes.  The officer also grew up in a children’s home.

For the next few hours, the boys and officer played role playing games, enjoyed time together and just got to know each other on a personal level.  Soon the afternoon was over, but the impact of the activity was on-going.   Derek stopped one of his cottage staff and mentioned that he had a much different perspective of the police after the event.  He even said that he might want to be a police officer one day.

Derek’s growth at Epworth continues today.  He walks with confidence around campus and he is excelling in all that is expected of him in the cottage, at school and at work.  He has turned his life around, and Epworth is committed to helping him stay on the right track and achieve his successes.

As he finishes his high school studies and work programs he will stay in the cottage, but he is already talking about joining Epworth’s Independent Living Program when he has finished high school.  There he will have more freedom than life in the cottage, which of course comes with a few more responsibilities.  He will be able to explore his options post-high school, whether that is higher education, job training school, or career readiness.  Along the way Epworth will provide a safe and stable place to live as well as a support system that teaches life skills and lessons needed for independence.

Derek’s young life has not been an easy one, and like all young people he has many hurdles still in front of him.  Yet through his growing moments, Epworth is providing him a space where he not only can turn his life around but also place him on the right track to set him up for a lifetime of success.