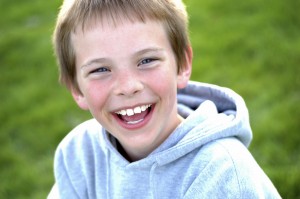 About a year ago, a boy named Nate* came to Epworth Children’s Home. Since his 10th birthday last year, his entire world turned upside down. His mom lost her job and battled issues of drug abuse. For months she tried to hold the pieces together, but soon they lost their home. By Mother’s Day their lives were falling apart. They moved in with relatives but things continued to spiral out of control.

An older relative realized what was happening, and reached out to help. While mom was getting the treatment she needed, she arranged for Nate to live at Epworth. Epworth welcomed Nate right away, without regard for his mother’s ability to pay.

As he entered his cottage for the first time, the staff showed Nate to his room and he unpacked his small trash bag, carrying the only belongings he had to his name. After settling in to his new environment, his case manager invited him to her office. As he sat down, his case manager asked him how he was doing. “I’m fine, it’s good to have a bed again. But I miss my mom.”

The staff arranged for him to call his mom and write a letter to her in treatment. They hung a picture of her right next to his bed. Throughout his stay the staff continued to build bridges with his mom so the two remained connected.

As Nate’s mom held her new job and began looking for a place to call home, she also came to Epworth to participate in family counseling sessions. As the pieces of his mom’s life began to come back together, the counseling staff helped them prepare for their new future. Just recently Nate’s mom signed a lease on an apartment and the two were reunited with a hopeful future ahead of them.

Just recently Nate’s mom wrote a note to the Epworth staff who cared for Nate during their traumatic year. Inside the handwritten card it said, “Thank you so much for the love that was freely given to Nate during his stay.” This Mother’s Day, Nate and his mom will be celebrating their new future together. Epworth’s ability to give a safe and nurturing home for Nate rescued both the boy and his mother from the downward cycle of homelessness and addiction. Nate’s stay was fully funded because of the generous United Methodist people who gave through avenues such as the annual Mother’s Day offering.

Sunday, May 11, 2014, is Epworth’s annual Mother’s Day offering. Epworth is not an apportioned item. Instead all United Methodist congregations are asked to generously participate in this historic annual offering. For more information on how you and your congregation can be involved this Mother’s Day, please contact Epworth at 803-256-7394.

* Name changed to protect the identity of the child and family