Follow-up: From Jail to College

The Fall 2013 cover story of The Record told the story of Trevor.*  Trevor spent 72 hours in jail before being cleared and released following a violent incident in the home with his abusive mother.  After being placed at Epworth, Trevor blossomed and when we last told you his story he was beginning to transform academically, emotionally and spiritually. 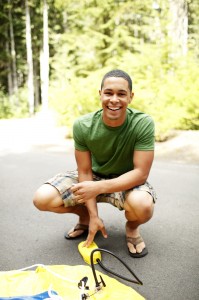 Since last Fall, Trevor has pushed himself and is maturing into a responsible young man.  When he started at Epworth his high school GPA was 1.75 and slipping.  His environment at home made it difficult for him to perform at school. With the safety, structure and support of Epworth he earned a 3.3 GPA by the end of his junior year.  His success continued this year as a senior, and though at the printing of this issue his final grades were not in, he consistently continued to make the honor roll at Dreher High School this year.  He also stayed busy after school in the marching band, wrestling, and as an all region-qualifier on the track team.

His teachers and Epworth are very pleased with his progress, but another important audience took notice—college admissions counselors!  Trevor’s transformation inside and outside the classroom allowed him to be accepted to multiple colleges.  With plenty of options in front of him, Trevor decided to take a college tour of his top choice with Mrs. Laurie Brandes, Director of the Independent Living/Higher Education Program at Epworth.

As they began the tour, the admissions counselor started to tell Trevor about life as a student at the college.  Trevor smiled and laughed a little, but did not say a word.   The guide continued the tour and at least three times Trevor repeated these small outburst of laughter.   When the tour concluded, Mrs. Brandes turned to Trevor and asked, “What was all of that laughter about, Trevor?”

Next fall he will be attending Lander University and intends to follow his dream of receiving a degree in criminal justice.  He has already received multiple scholarships.   His younger brother, now in high school himself, is very proud of Trevor and is already showing signs of following in his older brother’s footsteps.

Trevor’s transformation has not just transformed his life but it is breaking the cycle for his entire family.  He is serving as a role model for his siblings and for other residents here at Epworth.  The teen who faced an uncertain future just a few years ago is now walking confidently across the stage at graduation and right into college.